LAWRENCE — Peter Bobkowski, University of Kansas associate professor of journalism, is the recipient of the 2018-2019 Gretchen and Gene Budig Teaching Professorship of Writing. He will present a lecture on the importance of teaching writing at 4 p.m. March 5 in Watson 3 West in Watson Library. 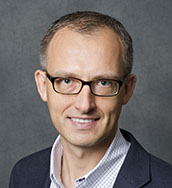 In his presentation, “Telling Stories: How I Learned to Write and Teach Writing,” Bobkowski will share reflections on his own writing process and how he mentors writers. The forms of writing that Bobkowski works on and teaches vary between projects and courses, from news stories and news releases to research reports, academic journal articles and an open educational resource. But among all these forms, he says, the keys to good writing don’t change.

“Dr. Bobkowski’s research and teaching reflect his passion for excellence in writing,” said Ann Brill, dean of the William Allen White School of Journalism & Mass Communications. “From his work in scholastic journalism to his recent book, he encourages that excellence in others, too.”

Bobkowski joined the journalism school in 2011. He teaches courses on reporting, information management, data literacy and mass communication theory and research methods. His research focuses on the developmental role of media among adolescents and emerging adults.

Bobkowski is active in scholastic (high school) journalism research and service. He is a 2015 Pioneer Award winner from the National Scholastic Press Association and received the Katich Award for Creativity from the KU School of Journalism in 2016.

Gene Budig was named KU’s 14th chancellor in 1981. During his 13-year tenure, more than 180 faculty positions were established. He was an active fundraiser during Campaign Kansas, the 1987-92 campaign that raised $265 million from private donors. Budig Hall is named in his honor. The Gene A. Budig Professorships and lecture series were established in 1994 by Budig and his wife, Gretchen.

“Dr. Budig was dedicated to excellence in education throughout his distinguished career. We are very appreciative of the loyal support that Gene and Gretchen Budig have always shown to the School of Journalism,” Brill said.