LAWRENCE — Pete Souza, chief official White House photographer for President Obama and official White House photographer for President Ronald Reagan, will visit the University of Kansas on April 24. His lecture and presentation at the Lied Center will kick off several days of events sponsored by the William Allen White School of Journalism & Mass Communications to commemorate the 150th birth year of its namesake, Kansas icon and Pulitzer Prize-winning writer William Allen White. 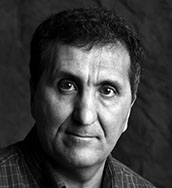 Souza, who has recorded intimate and historical moments in America and around the world, will share stories from his life as a photojournalist and his career as a presidential photographer in a free public talk at 7 p.m. at the Lied Center of Kansas. The talk will feature photos from Souza’s book “Obama: An Intimate Portrait.”

Carol Holstead, associate professor of journalism, arranged the visit. She has known Souza since college at Kansas State University and has followed the arc of his career from his start as a staff photographer at the Hutchinson News to national photographer for the Chicago Tribune to White House photographer.

“Pete’s work has always been remarkable, and not just because of what he photographs, but how he frames it,” Holstead said. “What we see reflects his good natural instinct for telling a story through the lens of a camera, but it’s also the result of persistence and an ability to become invisible when he’s shooting pictures.”

Ann Brill, dean of the journalism school, said Souza’s visit is a perfect fit with the school’s annual event honoring the legacy of William Allen White. Both White and Souza share a common experience of being influential in documenting presidential decision making.

“William Allen White and Pete Souza rose to prominence from small-town Kansas newspapers, where they practiced the ideals of ethics in journalism and a commitment to truth and accuracy,” Brill said. “We are thrilled to have Pete join us to celebrate William Allen White Day.”

During Obama’s eight years as president, Souza took nearly 2 million photos. Three hundred of those pictures are featured in his New York Times best-selling book “Obama: An Intimate Portrait.”  In the foreword to the book, President Obama wrote, “Over the course of eight years in the White House, I probably spent more time with Pete Souza than with anybody other than my family.” The book vividly captures that connection in its photos and the stories that accompany them.

Books will be available for purchase at the event. People who purchase books at the event also will receive a bookplate signed by the author.

Advanced reservations to the Lied Center event are not required.