LAWRENCE — A new documentary film about William Allen White will debut with a free premiere April 25, during the William Allen White School of Journalism & Mass Communications' weeklong commemoration of the 150th birth year of the Pulitzer Prize-winning editor of the Emporia Gazette. 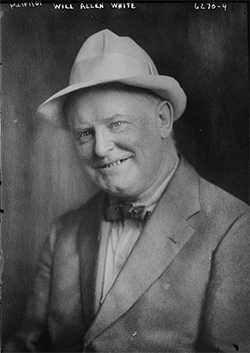 Kevin Willmott, KU professor of film & media studies, alongside producer Scott Richardson and their team, created the full-length feature film on White to preserve and extend the legacy of the nationally famous publisher known as the “Sage of Emporia.”

When Willmott first heard of the film, he was immediately interested, not only because of his history in Kansas — he created “Jayhawkers,” a film about Wilt Chamberlain and Kansas basketball in 2014 — but because of White’s fight to push racist organizations such as the Ku Klux Klan out of Kansas.

“My father would talk about how, on the Fourth of July, there would be parades and the Klan would proudly march down the street,” Willmott said. “The fact that William Allen White was really the person that was responsible for running the entire organization out of the state, that’s pretty amazing.”

Though much of White’s life has been preserved and recorded in biographies, along with his countless written works, the film will attempt to present topics that have previously taken a backseat to his journalism career. The film will center on White’s activism as a progressive Republican and his commitment to racial tolerance.

The film is being produced for national distribution along with an eight- to 10-minute video to be distributed to schools and colleges. The short version of the film is one way to spread education about White and his legacy, said Dave Seaton, the chairman of the fundraising committee.

“We want to help keep White’s legacy alive,” Seaton said. “The film is one way to try to do that. I’m grateful to all those who have contributed to this project.”

Other William Allen White 150th birth year celebration events, all free and open to the public: